Virtua Fighter is a 1993 fighting game, developed for the Sega Model 1 arcade platform by AM2, a development group within Sega, headed by Yu Suzuki. It was the first game in the Virtua Fighter series, and the first 3D-based fighting game (4D Sports Boxing was released few years earlier, but belongs to slightly different genre).

It has been ported to several home video game consoles including the Sega Saturn and Sega 32X. An updated version with enhanced graphics titled Virtua Fighter Remix was released in 1995.

It was an influential game in the development of 3D polygon graphics, popularizing it among a wider audience (along with Virtua Racing), demonstrating 3D human character models effectively, with realistic movement and physics, creating the basic template for 3D fighting games (such as Tekken, Soul and Dead or Alive), and playing a key role in the development of early fifth-generation consoles (the Saturn and PlayStation). It was followed by a 1994 sequel, Virtua Fighter 2.

Once in the era of Shōwa, the defunct Japanese army intended to approach Henry Pu-yi, the last Emperor of the Ching Dynasty in their effort to take advantages. However, they were defeated by the Imperial guards who utilized the martial art called "Hakkyoku-ken." Later on, the Japanese army was said to have plagiarized the mysteries of "Hakkyoku-ken" to create the strongest infantrymen and based on this art, complemented the ultimate martial art.

Approximately half a century has passed since then, and now, a young man named Akira Yuki journeys around the world to test his martial arts ability. The ultimate World Fighting Tournament is about to start, and all kinds of fighters from around the world, solely relying on one's physical strength, engage in a life-or-death tournament to determine the world No.1 fighter. Behind the Tournament however, there exists an intrigue designed by an evil syndicate.

Arcade Mode is the main mode in this edition of Virtua Fighter. Its is the player fights a series of computer-controlled opponents until reaching the final stage.

Despite the order, the "Final Stage" is considered to be Akira's stage since Dural's stage is a Bonus Stage where she does not have to be beaten. When defeated by Dural, the game will automatically end. This trend continues though the entire series.

The Virtua label indicates that the onscreen action takes place in 3D. The images were created using wireframes and flat-shaded quads. Beyond 3D, it retained the staple of multiple characters, each with their own distinctive moves.

The Saturn and NV1 architectures relied on quadratic polygon surfaces rather than the triangle polygons used in modern 3D graphics.

Unlike other fighting games of the time (such as Street Fighter II or Mortal Kombat), the game relied on a control stick and only three buttons, Punch, Kick, and Guard although different situations and button combinations led to a vast variety of moves for each character.

The game is highly regarded for its in-depth fighting engine and real world fighting techniques, and was considered revolutionary when it first came out.

According to Yu Suzuki: "3D graphics in games were very primitive. You could only make models from triangles, which didn't even have textures." He added: "There wasn't the opportunity to make graphics that were really beautiful, and because of that I decided to spend all my efforts to make character movements correct and realistic. Yes, Street Fighter had nice sprites, but we had the advantage of very smooth movements".[1]

The game was commercially successful in Japan. In the arcades, after a slow start, it became one of Japan's highest-grossing arcade games of all time.[7] The Saturn console port, which was nearly identical to the arcade game, sold at a nearly 1:1 ratio with the Saturn hardware during the Japanese launch.[8] It was credited with the Saturn's initial success in Japan, with the console being sold out on pre-release orders.[7] It was thus a "killer app" for the Saturn, allowing the console to gain commercial success in Japan. However, by the time the Saturn port was released overseas, it had less of an impact on Saturn sales in the West, as it was competing against newer PlayStation fighting games such as Battle Arena Toshinden.[9] Combined, Virtua Fighter and Virtua Fighter Remix sold around 1.5 million units for the Saturn in Japan.[10]

The arcade game was critically acclaimed. Following its North American debut at the 1993 American Amusement Machine Association (AMAA) show,[55] the October 1993 issue of Electronic Gaming Monthly hailed Virtua Fighter as a demonstration of "just how far video games have come in the last eight years."[56] They expressed "amazement at the graphics" as "an incredible display of technological wizardy" and described the animation as "fluid and lifelike" while praising the gameplay "as equally impressive." EGM made particular note of how the camera moves along different axes depending on the fighters' location, the use of multiple viewpoints in the instant replay, the high quality of the gameplay, and the smoothness of the animation.[56] They also noted how the "playing fields change with every match," the "very beautiful" backgrounds, and the "instant replay of the KO" after a bout where "you get to see the action in multiple viewpoints" while rotating the camera "around the ring," which they described as "a gimmick" that "looks damn cool anyway!" They stated that it "boasts some of the most advanced hardware ever seen in a video game," runs "faster" with "smoother animations than any" other "virtual-type" (3D) "arcade game in existence," and "would have been considered an impossibility just a few years ago!" They concluded it "gives us a good taste of things to come in the future."[56] The January 1994 issue of Electronic Games described it as "a glimpse of where future development may be headed" and stated that it "took Sega's award winning polygon graphics into a new arena, with full rotation, overhead angles and instant replays." They concluded that it is "Truly impressive."[57] In 1995, Next Generation magazine stated it "epitomizes Suzuki's skill of finding the perfect blend of state-of-the-art technology with solid gameplay", concluding it to be "fast", "beautiful" and "probably art."[9]

The Saturn port was also critically acclaimed. In Japan, on release, Sega Saturn Tsūshin scored the Sega Saturn version of the game a 38 out of 40.[47] Famicom Tsūshin (now Famitsu) reviewed the same version five months later, with its panel of four reviewers each giving it a score of 9 out of 10, adding up to 36 out of 40 overall.[29] This made it one of the magazine's four highest-rated games of 1994, along with Final Fantasy VI, Ridge Racer and Fire Emblem: Mystery of the Emblem.[58]

In the Western world, the Saturn port holds a 90% average aggregate score on both GameRankings (based on 3 reviews)[13] and Sega Retro (based on 24 reviews).[11] Edge rated the Saturn version 9 out of 10, stating "Saturn Virtua Fighter has all the pulling power of the arcade version, including the swooping, gliding game camera, the stylish polygon characters, the totally convincing animation and the compulsive gameplay...[The graphics] were impressive enough in the original, but on the Saturn, under the kind of intense scrutiny you can never give a game in the arcades, they emerge as simply astounding...It's arguably the first true 'next generation' console game, fusing the best aspects of combat gameplay with groundbreaking animation and gorgeous sound".[24] Electronic Gaming Monthly's panel of four reviewers gave it scores of 8, 8.5, 8 and 7 out of 10, adding up to 31.5 out of 40 overall.[26]

Famicom Tsūshin scored the Sega 32X version of the game a 30 out of 40.[31] Electronic Gaming Monthly gave the 32X version ratings of 8, 6.5, 8.5 and 7.5 out of 10, adding up to 30.5 out of 40 overall, or 7.625 out of 10 average. They called it an excellent conversion given the system it's on, but dated next to the graphically superior Saturn version and especially Virtua Fighter Remix, both of which had already been released.[28] Computer and Video Games gave the 32X version ratings of 86% for graphics, 95% animation, 80% music, 95% sound effects, 94% gameplay, and 95% value, with a 95% score overall. They concluded it is "Reason enough to buy a 32X with no regrets" and a "bargain opportunity to buy into the awesome VF phenomenon!"[22]

The PC version had a positive to mixed reception, holding a 78% average aggregate score on GameRankings (based on 3 reviews).[15] GameSpot criticized the PC port for being "not as fast or graphically appealing as the Saturn version," but concluded that it is nevertheless "unquestionably the best 3-D fighter published to date on the PC."[32]

Its blocky, plainly detailed polygon fighters were revolutionary in 1993 and were responsible for the game's distinctive look. According to 1UP, it was the first game to implement polygonal 3D human characters in a useful way, with physics, and it led the way in establishing 3D games.[54] According to GameSpot, Virtua Fighter and Sega's 3D racing title, Virtua Racing, were smash hits with arcade gaming audiences, and their popularity marked the beginning of video games rendered with 3D graphics, introducing it to the masses.[59] In 1995, Next Generation magazine referred to Virtua Fighter as "the most significant game of the 1990s" and stated it "is the biggest game in Japan since Super Mario World."[9]

Up until that time, fighting games (such as Capcom's Street Fighter series) were designed and rendered on sprite-based 2D graphics hardware—both the character animation and background scenery were composed of 2D sprites and tilemaps, which when using multiple layers produced a parallax scrolling effect as the screen moved to follow the characters. Virtua Fighter dispensed with the 2D graphics, replacing them with flat-shaded triangles rendered in real-time, using the Sega Model 1's 3D rendering hardware, allowing for effects and technologies that were impossible in sprite-based fighters, such as characters that could move left and right rather than just backwards and forwards, and a dynamic camera that could zoom, pan, and swoop dramatically around the arena. It also introduced a 3D physics engine, with realistic movement, where, according to 1UP, when "a character was hit in the head, they fell backwards as would realistically happen," and if "they were hit with a spin kick, they would spin away before hitting the ground," portrayed "in a realistic manner (where players could feel the impact when a character hit the ground and the character did not automatically bounce back up)."[54][1] The game had a more realistic take on the genre, attempting to represent actual martial arts disciplines, making it more of a fighting simulation.[9]

Virtua Fighter's graphics, however, quickly became obsolete due to rapid advances in polygon technology that allowed for rounder, more detailed, textured, higher-polygon-count character models, as seen in Virtua Fighter 2. Nevertheless, Virtua Fighter forever revolutionized the fighting game genre. Virtua Fighter, with its move to 3D, introduced a more realistic style of gameplay to the genre. Like what Street Fighter II had done for 2D fighting games, Virtua Fighter created the basic template for the 3D fighting game subgenre, inspiring franchises such as Tekken, Soul, Fighting Vipers and Dead or Alive.[54][53] In addition, it also laid the groundwork for 3D action-adventure game such as Shenmue, Virtua Quest,[54] and Tomb Raider.[60] 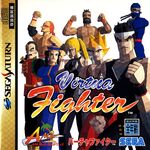 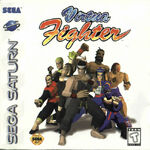 EU 32X cover
Add a photo to this gallery 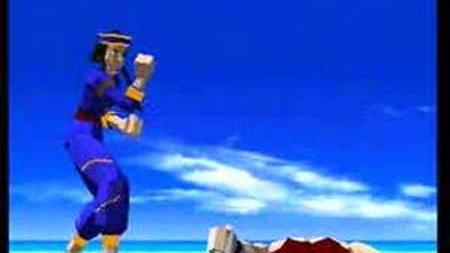 Retrieved from "https://virtuafighter.fandom.com/wiki/Virtua_Fighter?oldid=11995"
Community content is available under CC-BY-SA unless otherwise noted.