Fighters Megamix (ファイターズ メガミックス) is a 1996 fighting game developed by AM2 for the Sega Saturn and Game.com. It combines several characters from various Sega games, from the complete cast of Virtua Fighter 2 and Fighting Vipers to Janet from Virtua Cop 2 and the Hornet car from Daytona USA, while allowing to play the bosses of both games without codes.

Highly advertised, it followed Virtua Fighter 2 and Fighting Vipers as a high-profile 3D fighting game for the Sega Saturn. Intended as an introduction to Virtua Fighter 3 (which was never released for the Saturn), Fighters Megamix utilized the concept originally used by The King of Fighters, whereby characters and styles from different games were mixed together. Not only were the open ended rings from the Virtua Fighter series present (but now, with no ring-out), but the closed wall arenas from Fighting Vipers were included as well.

The Virtua Fighter 2 characters were updated with their new VF3 moveset (most but not all), and the dodge move introduced in VF3 was integrated into the game as well. This granted each of the fighters the evasive ability to sidestep, allowing them to attack from all sides. Sega capitalized on this, calling Fighters Megamix the first "real 3D" fighting game in the market. The game also had one of the largest fighting rosters at the time of its release, totaling at 32 characters.

Unlike most of AM2's games of the era, Fighters Megamix did not have an arcade release.

Regardless of the game type, all of the Fighting Vipers characters are equipped with destructible body armor, and are susceptible to higher damage if destroyed. The Virtua Fighter characters maintain a steady rate of damage as they do not wear armor to be affected by, but certain moves are given armor-destroying properties.

As well as having standard Survival, Two Player and Team Battle modes, Fighters Megamix uses an unusual style of 1 player play. Instead of standard Arcade Mode, the 1 player mode is split into nine subsections:

Each section consists of six fights against currently available characters then a final battle against a hidden character. Once you have completed the first four (the 'default' sections) the next three become unlocked, once you had completed those, the next (Bosses), and then when that is completed, the final (Bonus).

The default cast of characters consist of the entire cast from Virtua Fighter 2 and Fighting Vipers, including Kuma-Chan, a bear mascot in a hat that has no points of articulation, who has Sanman's moveset.

There are more than ten hidden characters in the game all based on other Sega games, including some planned but unreleased for the console, like Sonic the Fighters. Most are unlocked by completing all of the 1P Mode sections except for Novice Trial, which unlocks a separate costume for Honey (or Candy) that can be accessed by pressing the 'X' button to select her. Many of the characters have breakable armor, and share movesets with Fighting Vipers characters.

Bark the Polar Bear - One of AM2's creations for Sonic the Fighters, Bark is a cream bear with large tufts of hair sticking out from the front and back of his 'beanie' hat. He wears a scarf and mittens. His alternate costume is a Santa Claus-esque suit. He is unlocked by defeating the 'Muscle' section. He retains his home stage from Sonic the Fighters, albeit without the walls and with the background music from Sonic the Fighters' Flying Carpet stage instead.

Bean the Dynamite - The other of AM2's creations for Sonic the Fighters, Bean is a green duck who wears a neckerchief and Sonic the Hedgehog's famous shoes, without the socks. He is based on an old Sega arcade game Dynamite Dux hence his name 'The Dynamite'. His alternate 'costume' gives him the appearance of Bin from that game. His trademark bombs are still present, though changed in appearance and some functions, but he still has his three main bomb-related moves (overhead bomb spread, bomb kick, and tossing a bomb onto a fallen foe and covering his ears). He is unlocked by defeating the 'Muscle' section, though he is not fought until the Bonus section. His stage is South Island from Sonic the Fighters, which is actually Knuckles' stage from said game.

Deku - The only original character created for the game, Deku is a comical Mexican green bean in a hat, when his hat is smashed off, a bird is under it, perched on his head. If you win a match with it knocked off, the bird squawks during Deku's win pose. For his alternate costume, the Sega Saturn logo is on his head instead, which makes a strange vibrating noise if Deku wins a bout with his hat knocked off. His moveset is similar to Sanman's and is unlocked by defeating the 'Dirty Fighters' section. His home stage is the Training Mode arena.

Janet Marshall - Hailing from Virtua Cop 2, Janet shares a moveset with that of Aoi Umenokouji (from Virtua Fighter 3), and is equipped with destructible body armor like that of a Fighting Vipers character. Janet also has the advantage of using her gun in combat, shooting unblockable bullets that result in devastating damage upon her target. Using the gun three times in quick succession will force Janet to reload, accompanied by the "Reload!" voice clip from Virtua Cop 2. Janet can be unlocked by defeating the 'Girls' section. Her arena, Virtua City, is based upon the first stage from the original Virtua Cop.

Hornet - Hornet is a car (number 41) from Daytona USA, the car humorously stands on back wheels and boxes with its front wheels. Initially the car is limited to basic punches, kicks and a throw, but removing its armor - revealing body, engine and other parts below - it is far more agile and is given Bahn's moveset. Its voice is sounds of an engine and many other sound effects from Daytona USA, such as screeching tires. Both of Hornet's costumes are a reference to its automatic (Red and Blue) or manual (Red and Gold) transmissions. Its stage is based upon a race course from Daytona USA (the Beginner's course from the arcade game, "Three-Seven Speedway").

Rent-A-Hero - From the Japan-only series, Rent-A-Hero, originally for the Sega Mega Drive, and later Rent-A-Hero No. 1 for the Sega Dreamcast and Xbox. Rent-A-Hero largely shares Tokio's moveset with a destructible suit and a fireball move, but he also has an additional handicap: Battery life, measured by battery shaped red symbols above his health meter that deplete over time. If they all disappear, Rent-A-Hero shuts down, leaving him with a severely limited moveset, and susceptible to high damage without his suit. He is unlocked by defeating the 'Smart Guys' section. His stage is the "Chicago" stage from Virtua Fighter 2 (the stage you would get if you had Jacky and Sarah face each other in a match). It is actually unlocked before you unlock Rent-A-Hero, with the original VF2 music, but when Rent-A-Hero fights in the stage, the Rent-A-Hero theme music plays instead. His stage music was a remake of the title screen music played in the Sega Mega Drive version of Rent-A-Hero, which is similar to that of a Japanese sentai show theme song. The Japanese version of the song has vocals, while the North American and European versions have an instrumental version of the song.

Siba - Siba is from a prototype of Virtua Fighter but was cut from the cast by the time of game's actual release, though an icon featuring him (and mislabeled as "Akira") appears on older Virtua Fighter arcade cabinets. Siba is an Arab in a white and purple outfit equipped with a sword, and has Bahn's moveset. In addition to that, Siba can also use his sword in combat, which delivers high damage and is unblockable. Overusing the sword causes it to flash green, giving the opponent the opportunity to destroy it, similar to Raxel's guitar. Siba is unlocked by defeating the 'Bosses' section. His stage is based upon Wolf's "desert" stage from Virtua Fighter 3. Holding X while selecting him gives him a polygonal appearance similar to the style of the first Virtua Fighter.

URA Bahn - An improved version of Bahn from Fighting Vipers, he is unlocked by defeating the 'Fighting Vipers' section. His stage is on the outskirts of Old Armstone town, with the buildings from regular Bahn's arena visible in the distance.

AM2 Palm Tree - The developer's emblem is available as a playable character by clocking up 84 hours of game time, then selecting the Kumachan character with the Z button.

Mr. Meat (Niku) - This odd character becomes available after the game has been booted up 30 times. Mr. Meat is selectable by placing the cursor on Kumachan and pressing X and opting to play "course I".

At the end of the "girls" course, the second portrait to appear was Honey (Candy) posing without her armor and skirt. Retained in the PAL version, in the US this was replaced by a portrait of Honey (Candy) fully clothed and sporting her original "Player 2" colors (blond hair, blue dress) from Fighting Vipers.

A second, lesser known change was made to the image of Tokio posing with his shirt open and exposed chest from the "Smart Guys" course ending, rather bizarre considering that characters such as Wolf and Jeffry are seen bare-chested in normal gameplay. Also retained in the PAL version, this was replaced by a portrait of Tokio fully clothed in his default outfit in the US release.

The third image was the picture of Rent-A-Hero with the SEGA logo in the background. While the picture itself remains the same, the image in the Japanese version includes credits for the theme song.

Hornet car from Daytona USA
Add a photo to this gallery 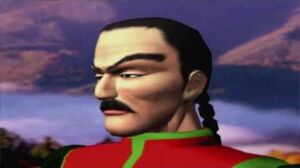